Robins are among the most widely-distributed and best known of all birds in North America. They can be seen and heard in forests, parks, and gardens – often whistling their heartwarming song late into the spring evening, and well before morning’s first light. If you are lucky, you may find a well-woven nest of grass, twigs and mud, cemented under an eaves or smack on top of a garage light. Commonly seen on lawns eating worms and grubs, robins don’t usually come to seed feeders. They may nibble on small fruits placed out, especially in cold weather. To that end, wild or ornamental cherry trees, as well as berry-yielding shrubs like dogwood, serviceberry, and highbush cranberry, are great food sources for robins and other fruit-eaters. 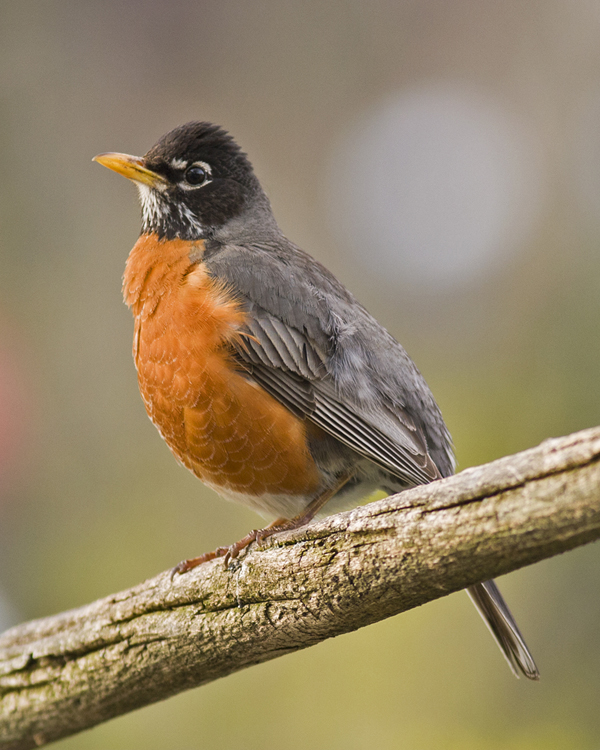 Although most robins migrate south for winter, many stay in southern Canada, retreating to ravines and other milder haunts. March and April see them return in great numbers. Canadians may wonder at the name ‘American’ Robin. This doesn’t mean they are largely residents of the U.S., though they are widespread there, too. The name distinguishes ‘our’ robin from the unrelated bird of the same name found in Europe, North Africa, and western Asia. Because that species also has a burnt orange breast, early English settlers to North America simply called the new (yet somewhat familiar-looking) birds ‘robins’ – and the name stuck.