During a recent trip to Vancouver Island my wife and I had the pleasure of staying in a brand new hotel on Qualicum Beach. It was a beaut. Shortly after arriving we went to the restaurant where we were greeted by an enthusiastic waitress. When we told her that we were staying in the newly minted hotel she asked abruptly, “So, how is the bed?” Mary and I looked at each other with a brief hesitation. I squeaked, “We only just arrived so we can’t really say.” I was pleased with myself for not saying what so swiftly ran through my mind in those brief seconds. This was not the time to be a smart aleck.

When making travel plans we often obsess over the sleeping arrangements. When I was a kid going to summer camp, the first priority upon arriving was staking out a bed. And so it should come as no surprise to us that insects are not much different. Each species has their own preference for accommodations with regards to sleeping and [for that matter] breeding.

Where our yards and gardens are concerned there has been a growing interest in biodiversity. With all of the attention recently given to honey bees and their decline, gardeners are beginning to see that our activity has a dramatic impact on wildlife in our larger communities. Put another way, the birds and butterflies that you attract to your yard belong neither to you nor to your neighbour but to a bigger world of which we are only a small but impactful part. When we plant and nurture, compost and mulch, place bird feeders, baths and houses we are doing much to change the biodiversity of the neighbourhood, whether we intend to or not.

The point of this column is to suggest that you become more purposeful about it. The arrangement that we have with Mother Nature on our real estate [whether it is terra firma or a balcony on the twelfth story of a condo] is not one set up merely for our convenience but is a privilege much like driving a car. Abuse it and serious damage can occur.

As we explore the natural world around us by planting more native plants [and we are!] why not build a hotel that attracts more insects to your garden? Let’s get one thing straight: 99% of the insects in your garden are beneficial. They will not seriously harm your plants and they play an important part in the dynamics that go on in the food web outside your kitchen door. Earth worms eat dirt and in digesting it produce nitrogen-rich earth worm castings that feed everything that grows in your garden. Robins eat the worms and leave free fertilizer sprinkled about your yard and garden [sometimes landing inconveniently on the deck or your head]. Centipedes, beetles, millipedes, ladybugs, bumblebees, earwigs and pill bugs all play a role in creating a garden environment rich in resources.

You can encourage insects to visit and reside at your place by building an insect hotel. These can be as simple or as complex as you want to make them. There are many designs for insect hotels and if you are a creative type, you can create your own.

The key is to use natural materials and to arrange it in such a manner that insects will find it attractive enough to move in. This is where the fastidious among us have trouble with the concept as the truth is that insects do not like a sanitised environment, like the one they advertise on the plastic, hermetically sealed drinking glasses that you find at the Holiday Inn. Insects like messy. They thrive on clods of rotting leaves, rough cut lumber or [better still] a stack of split firewood. Preferences vary from species to species, but you get the idea.

Mason bees, which are not inclined to sting and are more efficient pollinators than the much ballyhooed honey bee, breed in holes ¼ to ¾ in diameter, at least 5 inches long. Dead wood in various stages of decomposition and woody debris attract beetles and wood boring insects, centipedes and millipedes [if it remains a little moist].

House bricks make for a great foundation for your insect hotel. The holes in them provide spaces for amphibians like frogs and toads. To maximize their population in your yard, position your hotel near a water feature.

Longer, open-ended tunnels make great homes for snakes. In spite of all the bad press that they receive, a snake is a good thing for the garden as they eat rodents and a whole host of invasive insects. They are an important link in the food web.

If you build a layered or multi-storied hotel, plan for a few tunnels that lead to segregated, open, grass-free areas beneath the hotel. Toads and snakes burrow beneath the soil to overwinter and hibernate and have an easier time of it when the earth is exposed.

Dry leaves, layers of bark and plant debris act like a forest floor and tend to hold moisture, providing habitat for many kinds of beneficial beetles. Twigs provide a home for beneficial lady bugs.

Build your insect hotel in semi-shade, using the side exposed to sunshine for the bee residence and the darker, shaded side for cool-loving amphibians like garden toads and salamanders. Don’t plan on moving your insect hotel for a long while as insects have trouble re-orienting to a new home [which explains why it may take a few months or a year for new residents to set up shop in your creation].

As for maintenance, relax. There is little that you need to do. If you are attracting mason bees using cardboard tubes, you will need to replace it every spring. Don’t panic if you see fungi and moss growing on your insect hotel and there is a good chance that you will end up with mushrooms growing on the damp, shady side. This is all good.

If you find that birds are enjoying a meal at your insect hotel, secure hardware cloth or chicken wire at least two centimetres out from the surface of the insect buffet. This will give the poor dears a fighting chance at reproducing while the birds find another source to forage.

And finally, the hardest part of this exercise: relax. Learn to leave natural ‘debris’ where it falls in your garden. Come autumn rake the leaves off your lawn and on to your garden soil, where they will eventually break down and in the meantime provide habitat for insects and small animals.

If you are reading this and wondering what, on earth, is the world coming to? My answer is this: the natural world is coming to you by way of a new generation and new thinking about what a beautiful garden really is.

It is time to welcome Mother Nature home. 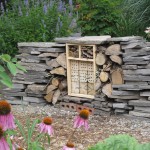