The True Value of a Tree

When is a tree more than a tree?  When is it’s value more than the sum of it’s parts?

The newly hatched ‘Highway of Heroes Living Tribute’ campaign endeavours to be just that: an ambitious plan to plant over 117,000 trees on the Highway of Heroes, between CFB Trenton, along the 401 to the Keele Street interchange where the coroners office is located.   This is the route that every repatriated body takes after it arrives here from abroad [most recently from Afghanistan].

The Living Tribute is an acknowledgement of the ultimate sacrifice that over 117,000 people have made during times of war since before Confederation.

How did this happen?

The idea of acknowledging Canada’s fallen in this way is the result of a discussion that started right here, in this section of the Toronto Star over 3 years ago.  In the summer of 2012 I wrote an open letter to then mayor of Toronto Rob Ford requesting that he support a ramped up effort to plant more trees in the city.  The emerald ash borer was wreaking predicable havoc on our ash population, which represented more than an 8% decline of the tree canopy.

In addition a new study was published by Forests Ontario called ‘A Healthy Dose of Green’ which quantified once and for all the benefits to all aspects of human health by a healthy tree canopy.

The call was never answered by Mr. Ford but I did receive numerous responses from citizens and not-for-profit organisations that were dedicated to enhancing the tree canopy.  In all 13 organisations agreed to meet to discuss what could be done by working together towards a mutual goal.  For two years we discussed the various ways in which we could work together for the greater good of all: the goal being the planting of more trees in urban spaces.

The Living Tribute is born

Again, from the pages of the Toronto Star, a story about the successful reforestation of a section of highway in London Ontario created a stir: the Veterans Memorial Parkway provided a perfect model for the Living Tribute Campaign along the Highway of Heroes.  If a small group of people could convert a 10 km section of highway into a living tribute to our war dead, why not along the 401?

The question was posed by Tony DiGiovanni, the executive director of Landscape Ontario [our industry trade association], “If we can do it in London, why not along the Highway of Heroes?”

Everyone at Trees For Life [the coalition of not-for-profit tree planters] agreed that our efforts required focus and this idea gave us that.  The opportunity to plant trees where they otherwise would not be planted using funds that were not otherwise earmarked for this purpose.  The result would be incremental growth in tree canopy in the 416 [and beyond] on property no one was about to plant.

In time we would have an agreement with the Ontario Ministry of Transportation [MTO] to access the 401 for tree planting.

Forests Ontario, the government of Ontario’s partner in the 50 Million Tree Program, has joined us in this important collaboration. Rob Keen, CEO, Forests Ontario explained, “This is the perfect accompaniment to our planting programs. It is a privilege to be the primary implementers of the Living Tribute campaign on the Highway of Heroes. We look forward to planting trees in honour of so many deserving Canadians.”

For their part Landscape Ontario have made a commitment to support the campaign with a cash donation, ongoing in-kind support for tree planting and fundraising from its member base of over 2,500.  “I really love to dream of possibilities” says DiGiovanni, “and this is one dream that will give me great pleasure to see come to fruition.”  He explains that support for the concept by his membership is overwhelming.

With support from CFB Trenton, where the Highway of Heroes begins, to Keele Street in Toronto, the vision of a newly forested stretch of asphalt that has stood for the sacrifice of many in the name of freedom is soon to come to life.  The transformation will be exciting.  As visitors and residents alike travel the busiest stretch of asphalt in North America they will, in time, be impressed by the stretch of green, life giving, oxygen producing trees that stand as a tribute to our fallen. 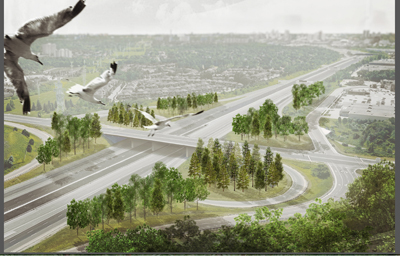 On Nov. 6th two official ceremonies will acknowledge the kick-off of the Highway of Heroes Living Tribute campaign.  One ceremony will take place at Canadian Forces Base Trenton and another near the coroners office on Keele St. at the 401.   You will find details of both events at www.hohtribute.ca.

If you would like to support our efforts to create a living legacy on behalf of Canada’s fallen war heroes I urge you to join us.  We are looking for volunteers for a wide variety of jobs and of course cash donations.  While a budget has yet to be finalized, we are certain that over $30 million will be needed to provide the trees and resources to get them in the ground.  Maintaining them for five years after planting is an important part of the process.

With the formal plan for the highway portion of the campaign underway we are now working on step #2: the planting of more than 2 million trees on adjacent lands to the highway on private and public property.  One tree for each person who has ever served in the Canadian Armed Forces.

The Highway of Heroes Living Tribute: the value of a tree has never been so great.