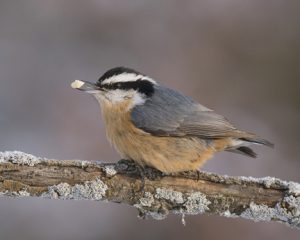 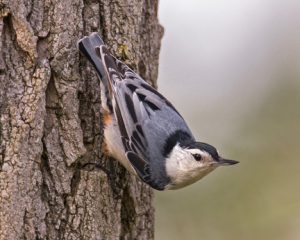 If you’ve been feeding birds for some time, you’ve probably seen both, very deliberately taking one seed at a time and retreating to a branch or tree trunk, where they tuck food in cracks and under bark for later use – provided jays, woodpeckers, or squirrels don’t discover it first! Nuthatches are fascinating birds to watch, as they saunter upside-down on a tree or straight along the underside of a branch. In winters of fewer pine and spruce cones, Red-breasted Nuthatches will migrate in large numbers – east, west, or south – in search of productive trees. Or your garden’s well-stocked feeder!