The Trouble with Impatiens

Did you plant impatiens this year? Did they dieback mid-season leaving you disappointed? Well, you are not alone. I have heard from many gardeners who experienced the same puzzling results. 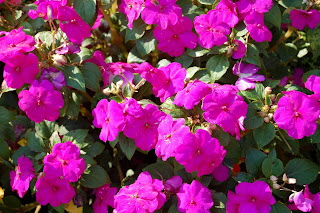 According to Horticulture Review, there is no clear explanation for this problem. One contributor blamed the large amount of rain early in the season, which caused fungus in the soil. This was followed by extreme heat and dry conditions.
Horticulture Review contacted scientists for answers:
Shannon Shan at the University of Guelph’s Pest Diagnostic Clinic received a few samples with a couple of root and crown rot pathogens showing up after culturing them. Shan’s thoughts are that perhaps the cool wet spring provided the perfect growing conditions for Rhizoctonia, a crown rot, and that gardeners should be using crop rotation with ornamentals – just like we do with vegetable crops.
OMAFRA specialist Wayne Brown looked at photos of dead impatiens. He said, “It is very difficult from the photos to say with any degree of certainty the cause of the defoliation. In the one instance, it looks like it might have been caused by Rhizoctonia, because the basal stems looked blackened, but Rhizoctonia does not typically cause defoliation. The defoliation is more consistent with either Alternaria Leaf Spot or downy mildew, but I can’t confirm based on the photos which of the two disease pathogens it might be.
Brown added that watering the plants during the night, or very early morning would promote development of either disease, and also recommended planting something other than impatiens next year to allow over-wintering inoculum to diminish.
Michael Celetti, a plant pathologist with OMAFRA, thought the problem might be Pythium, a water mold, causing root rot. Celetti notes that Pythium can be managed in the greenhouse, but once the plants are installed in the landscape it is difficult to control as it is spread by water. To help control Pythium, it is better to water lightly and frequently – which goes against the usual recommended practice of irrigating infrequently and deeply.

While there is no clear answer at this point, it is comforting to know I was not the only gardener whose impatiens packed it in early this year. I plan to rotate my annual plants to new locations next year and hope for better results.