You most likely know about the Venus fly trap: the carnivorous plant. But how exactly does this work?

Did you know that it doesn’t just close at random? The trap is a highly specialized mechanism that relies on electrical signals to know precisely when to close. Tiny hairs inside the trap sense touch. When an insect touches one, it starts a timer. If it touches another one of the hairs before the timer is reset, the trap shuts in a fraction of a second.

Why did the Venus fly trap develop this incredible ability? Well, it’s origins in the boggy areas of the world have left it no other choice. You see, bogs are naturally void of the nutrients plants need to survive. So, the plant has developed its own mechanism: obtaining these nutrients from living things. By releasing specialized enzymes, the plant can dissolve the insect and absorb the nitrogen, carbon, and phosphorus that it needs to thrive.

When the plant has finished its meal, it reopens. The insect, now a mere exoskeleton, is exposed and the plant awaits its next victim.

The Venus fly trap will eat a variety of living organisms. Flies, spiders, sow bugs, even frogs have been trapped in the plants clutches. Problems can arise, however, if the organism remains partly stuck outside the trap. Bacteria and molds can develop on the rotting carcass and the trap will eventually rot as well.

You can purchase Venus fly traps from specialized dealers for about $10-$25. It’s very important to provide them with the proper habitat. Remember that they grow naturally in bogs (devoid of almost any nutrients). Therefore, providing it fertilizer is one of the worst things you can do for it. Humidity is key and avoid potting soil. A combination of sphagnum peat moss and perlite. Finally, don’t feed your plant with dead bugs or too often.

Make sure you do a little research into this plant before you buy one. They can be great fun, but they require a bit of a different approach from the traditional approach that you and I are familiar with. 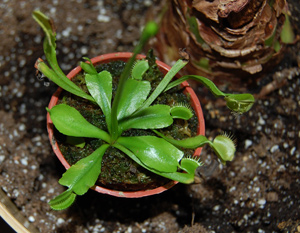