Your Trees in Winter – Part 2

Last week I told you about deciduous trees and their winter habits. If you missed it, check it out here.

This week, we’ll discuss the evergreens. Those saviours of sanity during winter when everything else is white.

Evergreens are drastically different than deciduous. I know what you’re thinking, “Well, yes, Mark , I can see that!” But there are differences beyond what you can see.

Last week, I told you that deciduous trees lose a lot of moisture through their leaves. Evergreens have managed a way around that by growing needles instead. Comparatively, needles have a lot less surface area: less area where moisture can escape. The needles, unlike leaves, have a waxy coating (called cutin) that further prevents moisture loss.

This isn’t just useful during the cold winters. There are massive evergreens (the giant redwoods) living in California, soaking up the sun. Their exposure to winter is fairly limited – the presence of needles also protects the tree during droughty conditions.

The presence of needles throughout winter allows the tree to absorb sunlight and produce sugars throughout the year, unlike deciduous trees that lose their photosynthesizing abilities in the winter. In order to keep the flow of water and sugars through the tree, the tree must be active. If temperatures drop drastically, they will produce more sugars, lowering the freezing temperature of the water.

The additional survival method is called acclimatization: getting used to the weather.

We do this – all animals do. In Canada, we know winter will come around and colder temperatures will begin around October. Because the cold comes on slowly, we don’t feel so cold during the -20 degree days of January. If we were to get a -20 degree day right after a 20° day, we would feel much colder even though it’s the same -20 degrees we would feel in January.

Trees are the same: they prep for winter even if they’re going to be active throughout it. A cold snap when it’s supposed to be warm can damage or kill trees.

So there you have it! Your evergreens are working hard out there in the cold but you can rest assured, they were prepared for it. 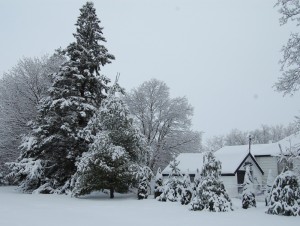