Anyone who has ever had a picnic outdoors knows how troublesome wasps and hornets can be. Social wasps are the most common stinging menace across many Canadian cities. They are attracted to sweet foods and are usually found scavenging garbage cans for their meals. These insects live in nests made out of paper. The nest can take on many shapes and sizes but the two most common are enclosed with an opening near the base or a broad open structure. Sometimes these nests are hidden in a corner or are in plain view hanging on a tree branch. 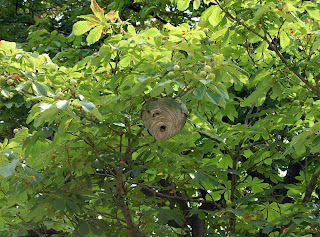 The best way to prevent wasps from making a home on your property is to inspect your yard and home early in the summer for any wasp or hornet activity. It is easier to discourage a single queen wasp from establishing too close to your home than to handle a full-size nest later in the season.

The next best way is to try to limit their food sources. Do not leave pet food or picnic leftovers out in the open and try to keep food and drinks covered while eating. Place a secure tight lid on garbage containers so the wasps cannot scavenge in it. Also, when spending time outdoors avoid wearing scented products like perfume or hair spray as wasps are attracted to the scent.

Wasp traps, like the Green Earth Wasp Trap, are another great way to lure these insects away from your living area. Make sure to place them away from patios and children play areas as wasp activity is increased around these traps.

If you discover a nest, treat it with Wilson One Shot Wasp and Hornet Spray to effectively trap and kill the wasps inside. Spray the nest after dusk when there is less activity and wear protective clothing to prevent getting stung. Do not shine a light directly on the nest as this will alert the wasps. Instead, put a red filter over it so you can see the nest without alerting the wasps.

If the location of the nest does not present a health hazard, you can leave the nest until November or December. Once it has been abandoned, you can remove the nest and dispose of it with less risk in these colder months.